(This was published in the July 2002 issue of Massage Magazine.) 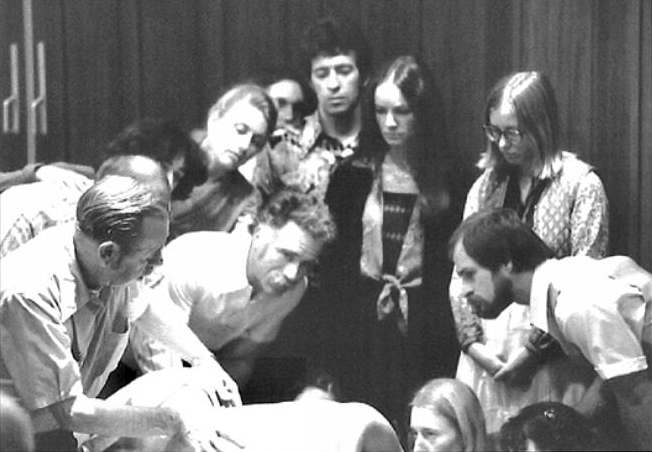 Lauren Berry Sr., RPT and Structural Engineer, may have been one of our most effective practitioners and teachers within the art of massage therapy. He was also exceptionally straightforward whenever anyone asked him what he did. "I'm not a healer and I'm not a doctor," he would say. "I'm just a mechanic."*

His legendary career as a bodyworker began at an early age when his next-door neighbor, a retired Finnish physician/masseur, took an interest in young Lauren and showed him massage techniques based on Swedish gymnastics and Body Balancing that he could use to help his ailing mother. Over time, the neighbor counseled and guided Lauren through helping his mother recover and regain her health.

Word of Lauren's talent and ability began to spread quickly. People simply showed up on the family's doorstep, eager for Lauren to "work his magic" on them. Lauren would often come home from school to find a house filled with people waiting for him. In later conversations, Lauren would jokingly refer to his earlier practice as a "ding joint," because his mother had set out an empty fishbowl for people to leave monetary donations. As coins were tossed in the bowl, they would make a "ding" sound.

A number of events and coincidences helped shape and guide a career in bodywork and alternative health that grew to be legendary.... Among these coincidences...

One day a mother brought in her son. Lauren performed his series of Swedish gymnastics stretches to rebalance the boys posture followed by relevant specific soft tissue work. The boy's symptoms soon disappeared and, a few weeks later, the boy's father came to visit and discuss his son's problem.

Apparently, the mother had heard stories about Lauren’s magic and did not tell her husband about taking their son to see him until after the child's symptoms had abated. When the boy's father discovered that Lauren had corrected the problem through manual therapy, he was intensely curious to discover how his son had been "cured." Evidently, he and his wife had taken their son to numerous health professionals for his condition diagnosed as St. Vitas Dance, and had found no relief. The father wanted to know how this uneducated young man had attained such dramatically positive effects for his son whereas modern medicine (this was approx 1930!) had fallen short. In addition to satisfying his curiosity, he had come to express his gratitude and support for what Lauren was doing.

As fate would have it, the father was the county Coroner and he arranged for Lauren to gain access to the autopsy room, providing him with the unique opportunity to examine human anatomy with a large degree of autonomy. He examined and compared anatomy with various distortions and irregularities, arriving at a basic understanding of how his manipulative therapies affected the body's overall balance and functional organization. This unique situation allowed him the "inside answers" to his growing questions of how and why the Swedish gymnastics techniques had worked so amazingly well.

Lauren's respect for the relationship of mechanical function and physical form continued to grow. Combining that with his appreciation for the beauty and orderliness of the body's soft tissue, he came to realize that the underlying factors in his clients' physical problems could often directly be related to soft tissue problems that were correctable with massage techniques.

From this experience came possibly one of his greatest contributions to the field of bodywork. He became aware that each muscle has a relative position within its surrounding tissues (muscles, tendons, ligaments and bones) where it functions at its healthiest efficiency. This position is determined by those surrounding structures, which create a ‘groove’ within which each muscle fits. He came to the understanding that tissue can become misplaced within its relationship to its surroundings and get out of its groove. A good portion of Lauren's magic included simply applying this body of knowledge and ‘putting things’ back where they belong.

Lauren would research within his practice, manipulating (repositioning and stretching) specific distorted muscles and restoring them to what he observed in the autopsy room as a more functional organization. As he applied these unique massage techniques to his clients, his amazing successes further validated his unique approach to pain and dysfunction.

It was in this setting that Lauren's respect for the human bodies innate intelligence and self-maintenance abilities began to grow. Throughout a career that would span over fifty years, Lauren applied these corrective massage and body-balancing concepts to decrease pain and restore function in thousands of people. One of his principles included respecting what he referred to as one of the body's primary automatic functions, maintaining upright balance with gravity. He suggested that when a body was out of balance, due to trauma, postural compensations, etc, the body's entire muscular system automatically adapted and compensated in an attempt to regain and maintain balance, which could create tensions, distortions and adhesions throughout the body. (For example, take one of those life-size plastic skeletons and just imagine trying to keep it upright without its accompanying metal stand!) Over time, these types of compensating adaptations could often interfere with the bodies innate repair mechanisms.

The initial focus in a session with Lauren would often be to correct postural imbalances, some of which the client might not even be aware. For example, when a client presented a knee problem, chances are they had developed some level of adaptation and 'limped around' their pain. Laurens initial goal would often be to deal with the primary imbalances relating to the 'adaptive limp' utilizing the Swedish Gymnastic movements his neighbor had shown him years ago. He would then apply the specific soft tissue corrective work to the knee. He credited a lot of his success to recognizing the body's primary balancing act and respecting how healthy tissue was optimally organized.

Lauren appeared to have 'x-ray eyes' in his fingers as evidenced by his performing the corrective massage techniques so simply and efficiently. Most likely, this could be attributed to his anatomical studies in the autopsy room and practicing for over 50 years. For his students, he encouraged us to observe and assist in his office while he demonstrated the principles and guidelines of his technique leaving us to do our homework. He shared his knowledge and insights through classes, apprenticeships and associations with manual therapists all over the world.


Lauren was a storyteller.

One of my favorites was of his travels in the Himalayas. He had been in the merchant marines and had left the ship in a Chinese port of call. While walking through town, he paused to watch some kids playing a game of marbles. He noticed one young boy was favoring his shoulder and Lauren approached to offer his assistance. A few minutes later and the boy had a big smile, as his arm did not hurt anymore. A few yards away stood several Tibetan Monks observing this and they approached Lauren to talk. They were a bit concerned as they had been expecting him, his timing was right, only they expected to see him at a different location and were thus suspicious he was an imposter…(later at the monastery they showed him charts and texts describing his arrival on the specific date.) After further discussion, he was invited to their monastery to share knowledge and techniques with their ‘physicians’.

Lauren stayed a short while with his hosts and from there arranged to visit neighboring monasteries, which were located approximately one day's walk away. Lauren set out for the next monastery and not far into his walk, local bandits approached him to determine what he was doing in their territory. Again, Lauren observed a shoulder problem with one of the bandits, who happened to be one of the leaders. He proceeded to relieve the bandit's shoulder pain almost immediately (it has been the authors experience that shoulder tension can often be remedied rather quickly without the initial rebalancing).

The bandits invited him to their base-camp where he worked on the local bandits and their families, again sharing his knowledge and techniques with their physicians. Throughout his pilgrimage, arrangements were made for Lauren to visit numerous monasteries and bandit camps, escorted and protected by his new friends, the bandits.
Talk about adventures in bodywork!!!

Following Lauren's passing in 1983, The Institute of Integral Health, Inc.® was formed as a non-profit teaching corporation.

This initially consisted of seven of his advanced students who had assisted him with his practice and classes in the '70s and '80s. Our present teaching staff also includes three assistant-teachers who are senior students who have passed their practitioner's exam. Each works within the Institute’s primary program and several offer workshops outside the Institute's official schedule. We have all agreed that by staying and teaching together we could pass on Lauren's amazing system in a way that would be responsible and not be overly influenced by any one individual teacher's personal view and interpretation of Lauren's work.

Each new student learns within an apprenticeship program similar to Lauren's. By staying within this framework, the Institute has responsibly continued to pass on Lauren's special work.

His work, memory, and contributions to the field of manual therapy continue to be honored under the banner of The Lauren Berry Method® of Corrective Massage. **

Taum Sayers is a certified Berry Method® practitioner, instructor, President of The Institute of Integral Health®, and author who continues to practice and present workshops nationally and near his home in Truckee, California.

The foundation of his practice is primarily influenced by his apprentice ship with Lauren Berry Sr. RPT and his ongoing association with his fellow board members, teachers and students within The Institute's ongoing educational programs. Initially, to study Lauren’s work, a student was required to have a sponsor; Taum’s original was Doug Reader and when he left for Europe, Jean Lincoln of South Lake Tahoe, CA took on the responsibility and continues to be a guiding light. Thanks Jean.